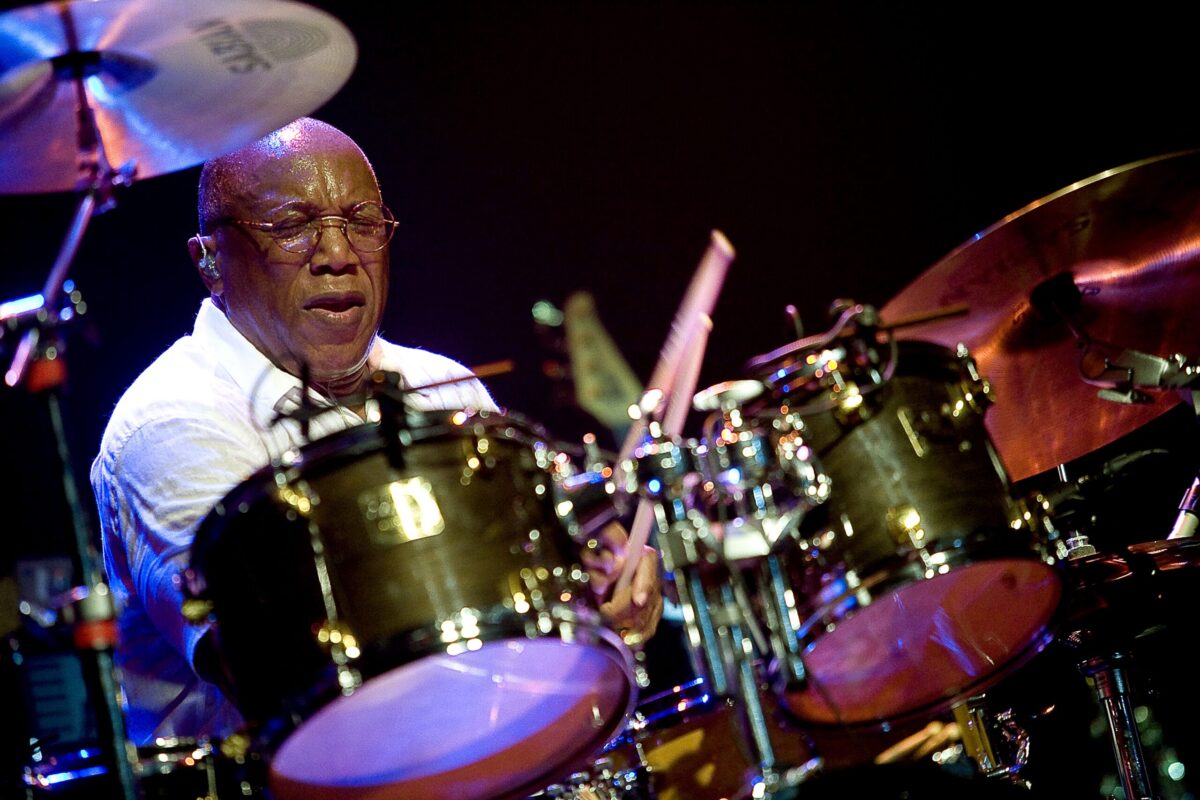 Born in Panama on May 16, 1944, and raised in Brooklyn, New York, Cobham got his first paid gig at the age of eight as a member of St. Catherine’s Queensmen, a drum and bugle corps in St. Albans, Queens. He attended New York’s renowned Fiorella H. LaGuardia High School of Music & Art and the Performing Arts, where he studied music theory and drum technique.
While in the military from 1965 to 1968, Cobham played with the U.S. Army Band as percussionist. After his service, he played in Horace Silver’s Band, performed with Stanley Turrentine and Shirley Scott, and recorded with George Benson.

In 1971, Cobham became a founding member of the jazz-fusion Mahavishnu Orchestra, along with McLaughlin, Jan Hammer, Jerry Goodman, and Rick Laird. This original group released three critically acclaimed albums: The Inner Mounting (1971), Birds of Fire (1973) and Between Nothingness and Eternity (live album released in 1973).

In 1973, Cobham released his debut solo album, Spectrum, a breakthrough in jazz-fusion that is universally recognized as one of the genre’s most significant and influential creations. Spectrum was recorded at Iimi Hendrix’s Electric Lady Studios in New York City. Cobham’s lineup for the album featured Tommy Bolin on guitar, Jan Hammer on electric piano, moog synthesizer & piano and Lee Sklar on bass.
Also in 1973, Cobham toured with John McLaughlin and Carlos Santana, performing material from the album, Love Devotion Surrender.

During the 70’s and 80’s, Cobham recorded for Atlantic, CBS, Elektra, and GRP. He collaborated with George Duke, John Scofield, Tony Williams, Jack Bruce, and The Grateful Dead spinoff band Bobby & the Midnites.

In 1992, Cobham was appointed to work with UNICEF to work with autistic outpatients and street children in Santos, Brazil in a musical project that lasted for several years.

By 2005, Cobham had recorded and released over 30 recordings under his name. He developed and enjoyed a special musical collaboration with the Cuban group, Asere.

In 2013, Cobham celebrated the 40th anniversary of the release of Spectrum by touring the U.S., Canada and Europe with the Spectrum 40 Band. Also that year, Purple Pyramid Records released the Billy Cobham Compass Point two-CD set, recorded live at Compass Point Hotel in the Bahamas in 1997, which was never released before.

Early 2014 marks the release of the much-anticipated „Tales from the Skeleton Coast“, which is the third installment of four recordings produced as a commemoration and celebration of Cobham’s mother and father, both of whom were musicians. In his words, „Tales from the Skeleton Coast reflects life experiences that I shared with my parents that I hold dear in my heart and mind, including impressions instilled in me while touring the region of what was previously called southwestern Africa but is now known as Namibia. The images of the Skeleton Coast in particular, still burn within me and through the music, I’ve created a sonic reflection of those cherished experiences.